The Secretary-General of the World Organization for Human Rights in the WSA, the UN Ambassador Ali Akil Khalil, telegraphed today via express mail a letter to US President Joe Biden at the White House in the United States of America.
Wishing him to work to stop the war on Yemen, Syria and Iraq.
And his demand for the prosecution of US President Donald Trump and his trial as a war criminal against humanity.In his letter to President Joe Biden, he said:Your Excellency, President of the United States of America, Mr. Joe Biden …

Mr. President :
In your opinion and the opinion of the civilized free world, are the Yemeni, Syrian, Iraqi, Palestinian, Afghani, Libyan, Iranian, Cuban and other people what the hand of the criminal Donald Trump committed against them are they not human ???

President Joe Biden:
In your opinion, the war of extermination 6 years ago against the Yemeni people, more than 200,000 dead, a million wounded, 10 million children affected by malaria, cholera and other diseases, 150,000 children were killed due to disease and hunger, the destruction of schools and hospitals, the bombing of markets and homes above their inhabitants with all the lethal and internationally prohibited weapons, and a blockade from land and sea  And the air by the war criminal Donald Trump and those with him? Isn’t this a crime against humanity?
What happens in Palestine from killing the Palestinian people and thousands of detainees inside the occupation prisons, supporting this enemy with all weapons, judaizing Jerusalem and giving it the capital of Israel by the criminal Donald Trump, is it not a violation of human rights and all international covenants ??
Destroying Syria and launching a global war against it 11 years ago by the United States of America and its allies, killing more than 100 thousand Syrian citizens and tens of thousands of wounded, and destroying entire villages and displacing nearly 10 million Syrians, and the support of takfirists by the United States of America, headed by the criminal Donald Trump  Humanity ??
What happened in Iraq, including the occupation, killing, and suicide bombings by the takfirists, with direct support from the United States of America, led by the criminal Donald Trump, is it not a crime against humanity ????
The assassination of the two martyrs, Major General Qassem Soleimani and Abu Mahdi Al-Muhandis, inside Iraq with bombing by the American air force and with the confession of the criminal Donald Trump, is not a criminal act.
The siege of a country and an entire people, imposing sanctions on it, and canceling the nuclear agreement (the Islamic Republic of Iran) is not a crime against humanity.
The economic blockade of Lebanon, the collapse of its currency, the starvation of its people, and the imposition of sanctions on it are not a crime against humanity.
Destruction of Libya and Afghanistan.  And the blockade of Cuba.
The killing of blacks in the United States of America and giving orders to storm Congress and cancel all international treaties and agreements and spread the Corona Covid 19 epidemic
Is not all of this a crime against humanity?
Mr. President ??
Why do not you dare to call the wars and violations that occurred in the Middle East region that it is supported and instigated by the United States of America !!!!
We call on you, as President of the United States of America, to immediately stop the war on the Yemeni people, lift the siege, withdraw American forces from Syria and Iraq, restore the nuclear agreement with the Islamic Republic of Iran, lift the blockade imposed on it and our country, Lebanon, and reconsider moving the American embassy to Jerusalem and recognizing it as the capital of Israel.
We also hope that you will issue an international arrest warrant for the war criminal Donald Trump and bring him to justice for the crimes he committed at the global level.

With your new era, we hope that you will not turn a blind eye to what is happening in these countries, especially the humanitarian side in Yemen. The war must be stopped immediately, the siege must be lifted, and humanitarian aid sent.
Mr. President.
The Middle East region is in dire need of assistance and support from you in order to restore security, stability, and a just and comprehensive peace,
Mr. President Joe Biden.
I believe that you have families, children and parents. We hope to see in your hearts some mercy and humanity when you see the pictures or reports that you receive every day about these countries and the wars and violations of human rights and severe injustice, famines, killing and destruction, human trafficking, arms trade, diseases.  Especially Covid-19 is widespread and severe in these areas, and there is no treatment, and all of them were supported by the United States of America led by the criminal Donald Trump !!!  Violations using internationally prohibited weapons. You are aware and certain. You were Vice President during the era of President Barack Obama, and you know more about me with all these details and what is really happening on the ground !!!
If this arrogant criminal who nearly caused a third world war due to his arrogance and paranoia is not pursued, then we will hold you all responsible.
As Secretary-General of the World Organization for Human Rights in the WSA, I call for his pursuit through our organization and all human rights organizations in the world.

Mr. President Joe Biden, you are assuming the presidency in the United States of America, and we have heard your speeches during your election campaign, and we are optimistic and confident that you will implement everything you promised during your election campaign and you will not be negligent in performing your duties against these peoples, where are you from humanity and the laws stipulated in the United Nations Charter  And the Universal Declaration of Human Rights !!
You are the state that raises the slogan of democracy and human rights and is directly responsible for what is happening around the world.

Therefore, Mr. President, we announce the launch of the international campaign to prosecute the criminal Donald Trump and file a lawsuit against him as the first person responsible for destroying and violating human rights in these countries based on the principle of equality, justice and dignity for all that you yourself advocate. Therefore, we will demand that a lawsuit be filed against him before American courts, international courts and the International Court of Justice.  For pursuing him as a war criminal who violated human rights and almost caused a world war with China, North Korea, Russia, and the last with Iran, after he admitted to the assassination of the Iranian diplomat, Major General Qassem Soleimani and the Iraqi leader Abu Mahdi Al-Muhandis, which is considered a violation of international conventions and norms.
Likewise, with a civil war inside the United States of America inequality between the American people, killing black citizens and attacking the US Congress through its mercenaries and at his personal instigation.
And a violation of human dignity
And international justice and the American constitution.
We wish you to take the courageous decision to stop the war on Yemen and lift the siege on it.  Equity for peoples and their rights, especially the Palestinian people, to determine their own destiny in an independent state.
And work to return the US embassy from Al-Quds Al-Sharif.
And return to the nuclear agreement with the Islamic Republic of Iran.
.
All the appreciation and respect for your Excellency, wishing that your era will be the era of democracy and human rights and the era of comprehensive and just peace at the level of the Arab world and the world.
Please accept the most sincere appreciation and respect for your honorable person.

Secretary-General of the World Organization for Human Rights in the WSA, the UN Ambassador Ali Akil Khalil 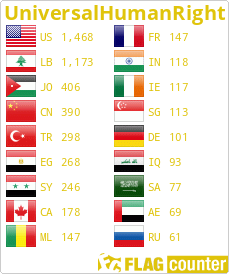